At Recycled Reads, I perused the stacks-- so many LP records lined up that I felt overwhelmed: Beethoven, Brahms, Vivaldi, Mozart, Liszt, Mendelssohn, Dvorak, Hummel, and on and on. I didn't know quite where to start. My arms quickly filled with a heavy load that I shoved above the stacks each time I paused to pull an LP.

I overheard someone talking about the day the LP sale began. She said that they had sold half of the entire stock in one day. People came from everywhere, swarmed the the small shop.

"As you can see, it is very picked over," she said. 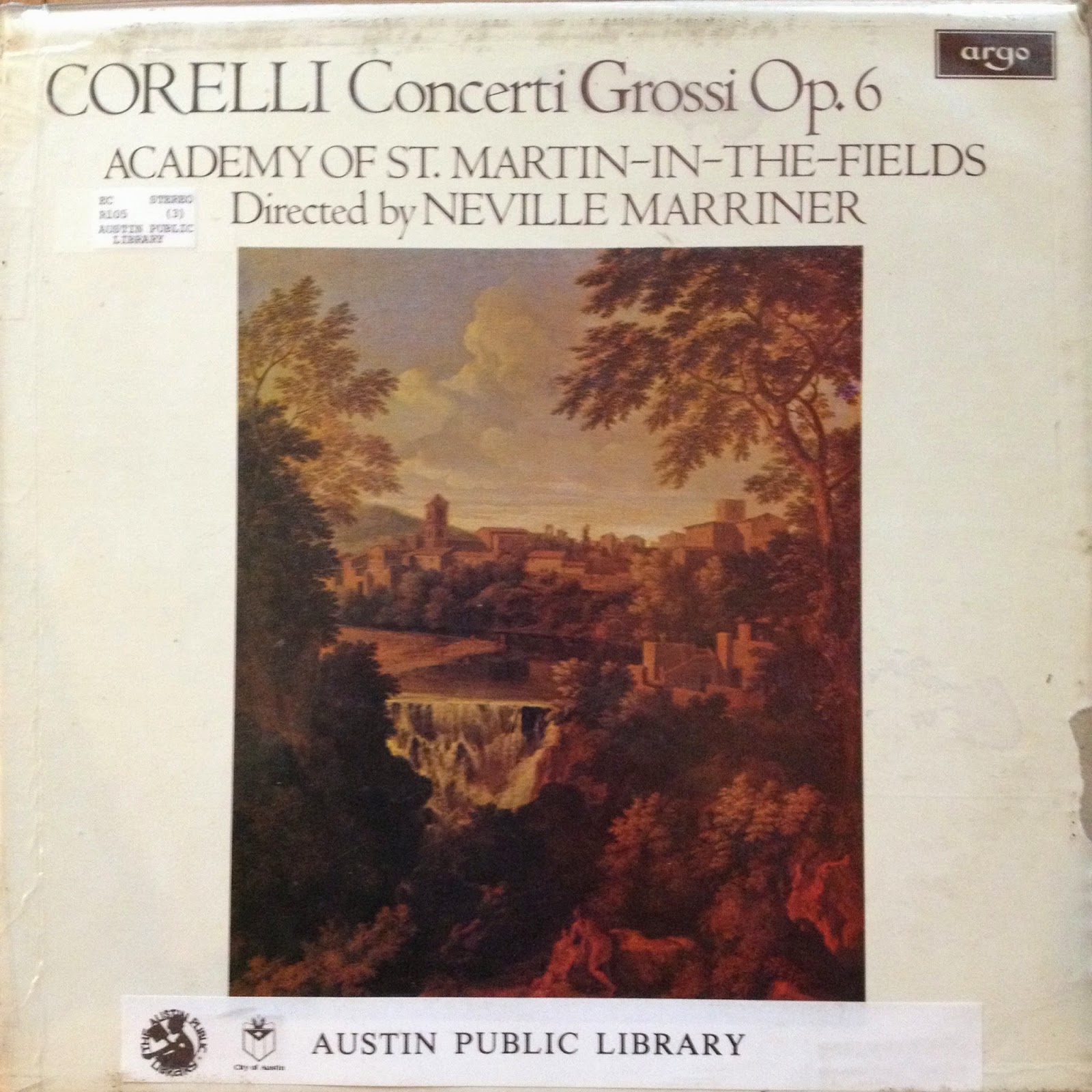 And it was, if one were looking for pop music or jazz or rock and roll. Of those categories there remained a "Captain and Tennille" and a "Jazz Accordion" record (which is evidently a whole genre of which I am blissfully unaware). But until she said the selection had been picked over, I had thought otherwise. What a treasure I had discovered of classical music (except for opera, which had been thinned to some horrid Wagner and Bizet works that no one of sound mind could bear).

Of the many wonderful things I came away with, the first that I spun was a three disk set: "Concerti Grossi," Op. 6 by Arcangelo Corelli. It is transporting music, not like the exquisitely romantic Ravel violin and piano works that I also bought, but in a peaceful, ethereal way. Listening to Corelli is like drifting down a calm river through a Renaissance landscape, painted by an Italian master.

Corelli (1653-1713) was a genius of the Baroque Era, but little is known of his life, except for anecdotes. Handel remarked that Corelli always wore black and collected paintings, and that when he performed the violin, (evidently, he was a first class virtuoso) his eyes rolled to the back of his head in agony (or, perhaps ecstasy).

Part of the Op. 6 is often associated with Christmas, so this is a good time of year to reacquaint yourself with his music. Link to Op.6, number 8, "Christmas."
https://www.youtube.com/watch?v=3Hp-vWZSpEM

I have paired Corelli with an Old Fashioned:

Place a single sugar cube in the bottom of a tumbler glass
Soak the cube with Angostura bitters
Add a dash of water and crush the sugar cube
Add 2 oz. of Bourbon
Add ice
stir
Drop in a cherry

If you liked this "vinyl-cocktail pairing," or didn't, send me an email at d@dsborden.com. You can also find other "pairings" by clicking the links at the right for "Vinyl-Cocktail Pairings," under SUBJECTS I BLOG ABOUT. (About half of the pairings are with classical records.)