The other day I stepped on the bathroom scale to discover that I weighed somewhere between "not so fit" and "could lose a few." 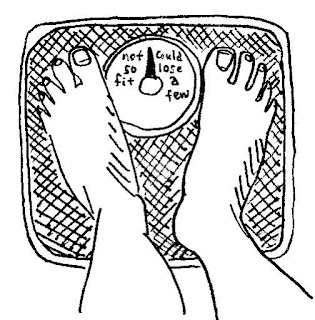 After Savannah's passing I had let myself slip into some bad eating habits, which is not uncommon among the bereaved: "comfort eating." I wasn't binging on half-gallon tubs of ice cream or chips and queso... I just wasn't eating healthy.

Before I knew it I had put on about 10 pounds. My pants grew snug and uncomfortable. Even those few pounds began to make me feel sluggish and added to a feeling of malaise.

It's been more than a year since she passed, so I decided it was time to lose the new weight.  I'm not a fan of diets. At work, there's always someone on a new fad diet of some sort, so I get to hear about all of them. With all the many expensive diet plans I've heard, I've decided to distill them down into a few simple steps below:

So far, I dropped five pounds with five more to go... the last five are the hardest.