The R-word (Retard) and the Failure of Political Correctness

We spend more time fighting language than we spend dealing with the root causes that created that language in the first place.

I think the Political Correctness (PC) movement has gotten off track. What started as a method for allowing people to talk to each other without loaded, demeaning, or condescending language turned into a way to stifle dissent and squash meaningful dialogue. It created an ugly backlash of people usng offensive speech as a "rebellion against tyranny."


Forget about PC, Go to the Source

We do not think in language. but rather in abstract notions that must be translated into language. Have you ever been at a loss for words? Have you ever felt an emotion you could not fully describe? How many times have you heard something called "indescribable?" Complex ideas fall into this category. Albert Einstein understood the concept of special relativity before he could explain it in the language of math: E = mc2.

In other words, a thought has to be translated to words in the brain before spoken.


Break Down the Process

I'm going to invent a guy named, John, in whose head we can watch the process of thought to expression play out. 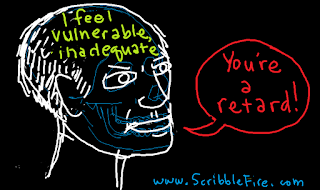 John's Strategy for dealing with this thought:
"I wish to put someone else down in order to elevate myself"

John's Language choices:
Option 1: "Articulate my feelings"
"No. That method makes me feel too vulnerable, look for second option"

John's Spoken word:
"That's retarded" or "You're a retard."

Political Correctness fails because it just makes John angrier. He already feels bad about himself. And now he doesn't have a safe way to express this feelings. If he speaks honestly, he'll feels too vulnerable in a world that does not allow men to be vulnerable in public. If he uses the word "retard," he is vilified. As a result, his anger builds.


What is the solution?

For this particular issue, we need to have an open conversation about people with developmental disabilities (which I think is starting to happen). I had a daughter with special needs. She was so much more than the sum total of her disabilities. She had a brain injury that left her mentally retarded. And everyone who knew her saw past her complex issues. No one who has a real relationship with a person like her would ever use the word "retard" because they understand its pejorative nature. Why would they say something so awful about such a beautiful person?

I am not hurt by the word "retard." It has lost its power. And you should take its power, too. The word says more about the user. It says that he or she is ignorant, but deserving of my compassion. Unless you're a sociopath, you only attack others in self-defense. To use a hateful word to injure someone, means the user feels backed into a corner and must lash out. They've lost the argument, lost power. They are feeling ashamed, confused, or intimidated.

Next time you hear someone use the R-word, instead of scolding them, which makes them defensive, invite them to meet a person with mental retardation. If they're normal, they will most likely see that persons with disabilities are just a deserving of respect as anyone else.

Labels: Life with Savannah: the other normal. Writer Year of the Phoenix