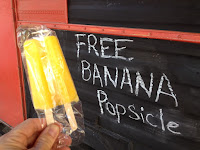 It being August, the sun irradiated anything in its line of sight. Tamara and I sheltered under one of the tents strewn with picnic tables outside the yawning mouth of the Austin Beerworks brewery. We bought a deep fried veggie burrito egg roll from the food truck, "Frydeez," The bearded, truck-guys were giving away free banana Popsicles to help people cope with the heat. Thank you, thank you, thank you... 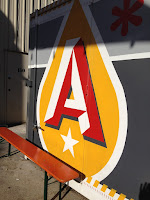 The place was packed with hipsters, oldsters, people like us, and millennial parents who bring babies to breweries and act as if that is perfectly normal. Millennials are much maligned in our society, but I respect their attitude about disregarding decorum and idiotic cultural norms that have persisted long past their shelf life. Some of the more jovial and youthful of the patrons broke into a spontaneous sing-along with a song from the 90s. I didn't know the tune, but apparently it must have been significant to them in their childhoods. (That makes me sound so old. Weren't the 90s just last week?")

For years our attendant care expired at 4 on Saturdays. Sunday care wasn't reliable, so we never planned anything on Sundays, except disappointment.

"It feels strange. It's like there's this whole world to explore of things to do at night," I said, alternating between slurping my Popsicle and drinking my beer."It's like we have to re-learn how to be normal."

Because Austin Beerworks is a brewery, not a brewpub, they sell tokens for the tasting room. We bought plenty. One of the workers stood next to the grain mill and announced last call on a bullhorn.

"Wow. We can say we stayed out until last call," I said, smiling wryly.

"Technically yes, but the place closes at 7:00," Tamara said. "You ready to go hear some music?" 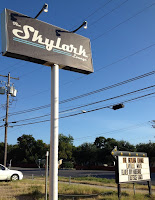 We drove over to the Skylark Lounge, which is a dive bar on Airport Blvd. It's not one of those pretentious, over-priced hipster joints that keep erupting everywhere with clean floors-- all done up with sleek modern concrete and steel construction, high windows, and prefab, fake Austin decor. And there's not a TV in the place telecasting the endless jibber-jabber of sports. The Skylark is dark, dingy, and simple.

We went to see Austin Music Hall of Famer Blues Boy Hubbard and the Eastside Kings, who put on a fantastic show. We ate popcorn. We drank canned beer. We acted like people do who don't have to take care of a child with multiple severe disabilities.

By 9:30 the Skylark was standing room only. A fifty-ish couple asked if they could share our booth. Lavelle White's band came on at 10:00 and absolutely killed. People were dancing and standing shoulder to shoulder in the small bar.

It's full of refreshing surprises... it's freedom, its glasses of fresh-brewed beer, its savory deep fried food, its conversations about art, it's making funny faces at the blue-eyed baby next to me at the picnic table. It's a blues show from some of the greatest artists Texas has to offer. It's a dive bar. It's the joy of hot, salty popcorn.

There is this whole life after 4:00 to be explored... and it's like the surprise of getting a free banana Popsicle on a hot day... I'll have seconds, please.

Labels: Life with Savannah: the other normal. Reasons I live in Austin Year of the Phoenix