I think I'll stick with 1977 at little longer because in that year Fleetwood Mac released Rumours, which found its way into our family's record collection soon afterward.  There are three things that are true about this album:  1) It has withstood the test of time, 2) it  has some of the best break-up songs ever written, and 3) it sound good really, really loud. 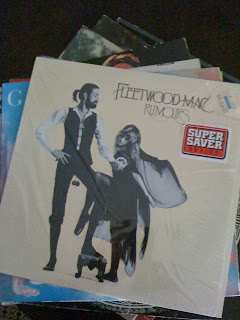 I have many fond memories with Rumours, but one, in particular, stands out from 1991.  One of my college roommates, a fellow named, Big Chris (owing to the fact that he'd been a power lifter) and I were gorging on tacos from Taco Shack on what we referred to as our veranda, but was really the second storey walkway in front of our dismal, cinder-block apartment building.  It was the kind apartment building whose sunken courtyard was a parking lot.  From our perch we could watch the peculiar comings and goings of our disheveled neighbors and critique the various techniques of the local dumpster divers.  Tamara thought the place squalid and rarely came over.  One day a neighbor confided in my other roommate, John, that the other tenants were afraid of Big Chris and me.  We had long hair and beards and could be frequently seen relaxing on the veranda, wearing sombreros, our chairs tilted back on two legs, our feet up on the handrail.  John snapped a photo of our glory once.  (If I ever run for political office, I shall have to find him in his Northern California hideout and destroy his entire photo archive.)

Anyway, Big Chris had Rumours on CD.  It was a gloriously crisp spring afternoon.  "Go Your Own Way," blared through our open windows, most likely to the chagrin of our neighbors, while we ate tacos on the veranda.

"The drums on this song are killer!" he said, closing his eyes and pounding away at the air.

After the song ended, he turned his hairy head my way and said, "You know, people always talk about the good old days.  But the problem with the 'good old days' is that you don't know they are happening until they've passed."

I looked at him for a moment, raised a taco and said, "These are the good old days."

He smiled broadly, "You know what, your right.  Cheers."

So, what is the appropriate drink to go with this album, 20 years after that episode and 36 years after its release?  The perfect drink should be light and colorful.  I think a Tom Collins suits nicely.  Here is my recipe: 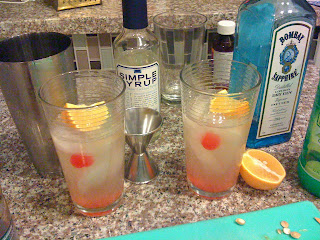 
And don't stop thinking about tomorrow.