Early on the Friday morning after Thanksgiving, while darkness still filled the house and our fellow citizens were showing their gratitude and thankfulness by trampling each other in a Walmart parking lot, Tamara's phone announced the arrival of a text message.

She read the text.  "She says she has a high fever and can't come in."

Attendants, in my experience, tend to call in sick around various holidays, even the good ones.  Because the phenomenon is so common, it is hard to know when they are actually sick or faking, and the longer we've been at this, the less we even care. We have learned not to depend on attendants at the holidays.  We don't plan important outings or things that would require help because, by doing so, we would only be inviting disappointment.

We lounged around the house all morning.  We lingered in our pajamas, listened to some Beethoven trios, drank too much coffee, made steaming-hot pancakes, and read with a warm cat purring on the lap.  Savannah watched her beloved cartoons. 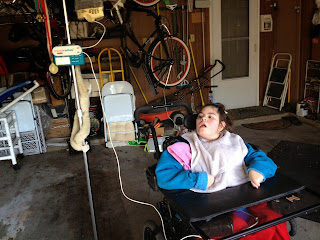 In the afternoon, after eating too many leftovers, we performed one of our cool weather rituals: cleaning the garage.  Ruby helped until she unearthed a jumbo bottle of bubbles and a bucket of sidewalk chalk (man, if I'd only gotten to them first!)

She pointed at her bright art on the pavement.  "Mom, Dad, this is a snowman, that is a dancing robot girl, and here I drew a knight-in-shining-armor fighting a dragon."

I asked, "Are these pictures connected?"

She dashed off to build a pulley system in one of the trees with a roll of twine and a shopping bag for her stuffed animals.

We worked through the afternoon.  I measured out the wall where I was going to install shelving.  A car pulled up at the curb and a woman with tattoos approached the house.  I recognized her as one of our attendants in training.  She went inside and Tamara got her oriented while I continued working.

The thing about my garage:  no matter how often I clean it, it is never really clean.  The dust and cobwebs tenaciously cling to every corner.  I install shelving, invest in organizers, label tattered boxes with their contents, but like my life, no matter how fastidious I am, it soon becomes messy.  As I rummage and sweep and sort, I find things I thought I'd lost.  I wonder, "Why I held on to so much worthless junk far too long?" I  fill a car trunk with donations.

Tomorrow I'll spend the day transforming a whole wall into shelving and the garage will be ordered once again.  Tamara and I will stand in the middle of the floor and survey our handiwork and marvel at how good it looks.  We'll say, "I can't believe we have so much space," and "It sure looks good."

We'll pledge to keep it clean.

But, we've been cleaning garages together for many years.  We know that this moment of perfection will pass, and that as soon as the holiday tranquility evaporates, entropy will consume our lives once more.

Next fall, when the first cool weekend comes, we'll clean it out again.  And we'll donate another trunk-load of stuff to those less fortunate than ourselves.
Labels: Life with Savannah: the other normal.