I'm listening to a two disk set of Georg Philipp Telemann's Musical Diversions, performed on period instruments by the Aulos Ensemble in a 1984 recording.

Telemann was almost totally forgotten until a revived interest in the Baroque period after World War II.  However, in his time, he was one of the most influential and sought out composers. His salaried income from various positions was three times that of J. S. Bach.  Handel respected Telemann enough to steal whole melodies and even a few movements from him.   Musicologists incorrectly attributed several of his works to J.S. Bach owing to their similarities.  He was personable and had a great sense of humor. 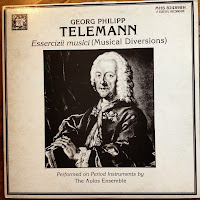 One of Ruby's friends is staying over tonight.  They take a break from playing and dash through the living room on their way to the kitchen.  The friend stops when she notices the music.  She points at the turntable, "Is that a cassette player?"

"It is playing right now."

Her eyes grow wide.  She inches up the machine.  She leans over the spinning record, watching it whirl.  "Cooool," she says.

She's never seen a record player before.  Somehow it seems fitting that Telemann is playing on this obsolete, mechanical device.  She runs off to join Ruby again.

This record is tremendous, except for the dreadful side 3, Suite No. 6 in C maj for Solo Harpsichord.  You may like harpsichord, and if so, I wish you great happiness in life because evidently you have found effective medication for your psychological condition.  I, on the other hand, am grateful that I have had a couple of cocktails and am warm and comfortable enough to endure the suite.  Oh, screw it, I'm getting up to flip the damn thing over.  Ugh! Harpsichord!  It's like a bad film score from the 1960s.

For a taste of Telemann, follow this link:  https://www.youtube.com/watch?v=E-NPcOc2cnc

The cocktail pairing for Telemann:

I recommend a derivation of the Vermouth cocktail, which, like this composer is almost totally forgotten.

2 oz. Dry White Vermouth (My favorite is Dolin Blanc de Chambery)
A splash of Sweet Vermouth (not too much of this.  Sweet Vermouth is easily overdone in my opinion)
A splash of Lemoncello (if you are without, a squeeze of lemon will do)
Dash of Angostura bitters
Shake with plenty of ice.  Pour into glass of ice and top with soda water if so inclined.