It is truly amazing how time gets away.

It doesn't seem like a year ago that we paid a visit on some dear friends of ours who were grieving the loss of their oldest child, a child with disabilities similar to Savannah, a child who had been her friend at school. She liked to visit him in his class, so her teacher had programmed her communication device with an option to see him.

He died suddenly in his sleep, most likely the result of a seizure that stopped his heart.  We sat around their kitchen table, drinking wine, nibbling snacks, and talking while Ruby and their other son played outside.

They told stories about their child who had passed.  We talked about Savannah.

The father said, "Sometimes I think I'm doing fine, but then, something reminds me of him and I realize I'm not so fine," he paused, "I wasn't ready for him to go."

We talked about things completely unrelated to our children.  We laughed.  We ate a dinner that a kind friend had given them.  The phone rang with concern.  Well-wishers came and brought food and expressed their solidarity in this time of sorrow.

I was moved by how many people cared about this family, how many lives they and their son had touched, including ours.

In the car, leaving their house, Ruby said, "I'll outlive Sister, won't I?"

What response do I have for that?  I could sugar-coat things for her.  I could lie.  But I don't.  We don't have that kind of family.  Our family doesn't have the luxury of pretense or modesty... we live in a raw world where the human body and all its functions and foibles are on graphic display.  Ruby expects no less than brutal honesty.

I said, "That's right. Your sister will die before you."

Her voice grew sullen, "You and Mom will die before me, too, won't you?"

"I don't want you to die," she said with real sadness in her voice.

"Hopefully, you won't have to worry about that for a long time."  I glanced into her reflection in the rear-view mirror.  "One day, when I'm very old, I'll die, and that's normal and natural."  I looked at her soft face, illuminated in the waning light in the car window.

"I don't think I could bear it the other way around." 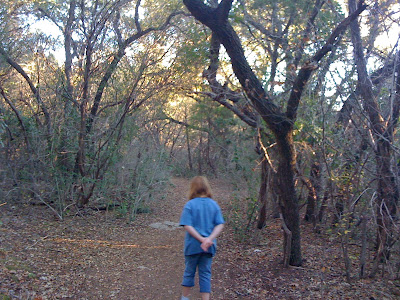