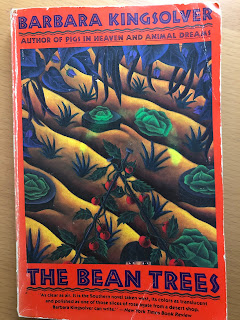 I must have read an article somewhere that recommended this book. I'd read Barbara Kingsolver books before in the early 90s (most likely). I had a favorable memory of her in the back of my mind, so I thought, why not? I'll pick up one of her books next time I see one at Half Price Books.

I recently read The Bean Fields. I can confidently say, I will never read it again, nor will I pass it on to anyone else. It will go back to Half Price Books or Goodwill. Maybe it'll speak to someone else.

Why my distaste? It had a few good moments, but on the whole, it falls into the category of "maybe it was relevant when it was written, but now it's cringy." It was a product of its time. I found the plot, which revolved around the single white woman who receives and abandoned and sexually abused "Indian," (Native American) toddler a little too fraught. I couldn't get past how the white woman saves the Native American child. Gag. Such a colonial mindset. Even the subplot was about white women helping undocumented immigrants from Central America felt condescending and trite. Like I said, maybe this was edgy and not so patronizing in the 1980s, but from a 21st c. perspective, it was full of wincing, groaning, head shaking moments for me. It felt like a bunch of trite tropes in search of a purpose.