Tom Lehrer once said, "It is a sobering thought that when Mozart was my age, he'd been dead for two years."  Mozart died in 1791 at the ripe old age of 35.  Being more than a few years beyond where Lehrer was when he said that, I'm thinking, "What have I accomplished?"  I could say, "It is a sobering thought that by the time Tom Lehrer was my age, he'd gotten his Ph.D. from Harvard, taught at MIT, put out three successful albums, toured internationally, retired from performing, and made numerous TV appearances. (Here is a link to a 1967 concert version of "The Elements."  I particularly like the second version that he does, the Aristotelian version:) 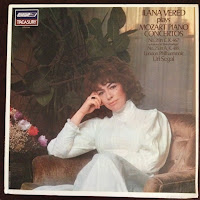 Enough introduction.  Let's make some cocktails and spin a record.  For this evening's program I've chosen two piano concertos by Mozart (No. 21 in C, K 467 and No. 23 in A, K 488) played by Ilana Vered. Check out that crazy Victorian dress she's wearing!  I find No. 21 upbeat and charming, nice music as background to conversation.  When the A side is finished, make another round and turn the lights down low.  When the  melancholic and serene, slow, second movement, Andante of No. 23, comes on, turn up the volume and soak it in.  Mozart's father, Leopold, after hearing the 2nd movement, remarked, "Indeed, it is not quite right."  But isn't that what critics say of ground breaking art?  But in some ways Leopold was correct in his assessment.  The second movement is not exactly what you expect from Mozart.  It is so intentionally sad.  You can hear his struggle with trying to survive as a freelance artist.  You can hear his crushing debt and suffering for his art.  You can hear how his late operas were neither appreciated nor commercially successful in prudish Vienna.  To me, the self doubt, the fear, the depression of being misunderstood all but consumes him.  He seems to be at an end when the third movement bursts forth in a swirling minuet of happiness.  Just when you think he is broken, he bounces up and we're off again on a new adventure.  The piano plays rapidly.  It is as if Mozart himself if playing so rapidly that the orchestra, and the rest of the world, can barely keep up.

Below is a link to one of the recordings mentioned here, Concerto No 21.  (I described Concerto No.23 above) 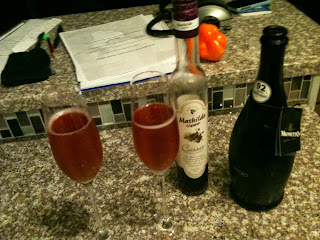 Few cocktails are up to the challenge of complimenting the wit and sophistication of Mozart.  I can think of only one: the Kir Royale.  One word of advice from my experience with making cocktails that have wine as an ingredient, such as sangria or anything with vermouth:  don't give in to the temptation to skimp on the quality of the wine.  Bad champagne is bad no matter what you mix it with... and cheap vermouth gives the whole style a bad reputation (a good dry white vermouth is excellent over ice with a squeeze of lemon).  My favorite standby for sparkling wine is Gruet Brut from New Mexico. It tastes like it should cost twice as much as it does.  If you are new to sparkling wine, note that "sweet" means it tastes like a sugary soft drink, "dry" means semi-sweet, and "brut" means dry.

Fill flute with sparkling wine (brut)
Add a bit of Creme de Cassis to taste.  (Be careful, this stuff is sweet and can easily overpower the champagne.)
Admire how the wine has turned a rosy color.
Serve.