Brahms, in his later years was a chubby fellow with an astoundingly manly beard, which I envy.  He enjoyed drinking beer with friends, laughing, and joking.  His humor was often sarcastic and biting and off-putting to polite people.  He was prone to grumpy moods, and if he encountered pretensions he could verbally assault the offending person to such a degree as to drive them to tears, even at a dinner party. He liked long walks in the country and spent summers rambling the hills, thinking through melodies in his head.

Brahms never married, though he had several love affairs over the years, one of which was with Clara Schumann. After Robert died, Brahms lived at the Schumann house and took care of the children while Clara was away on tour.  (see previous posting:  http://dsborden.blogspot.com/2014/02/the-hopeless-romantic.html to see a picture of Clara)  They wrote each other impassioned love letters, but never seemed to take the relationship beyond a platonic level though they were closer and more intimate than most married couples. They remained friends for life, and in their old age, returned each other's correspondence in order to burn the evidence of their earlier passion. 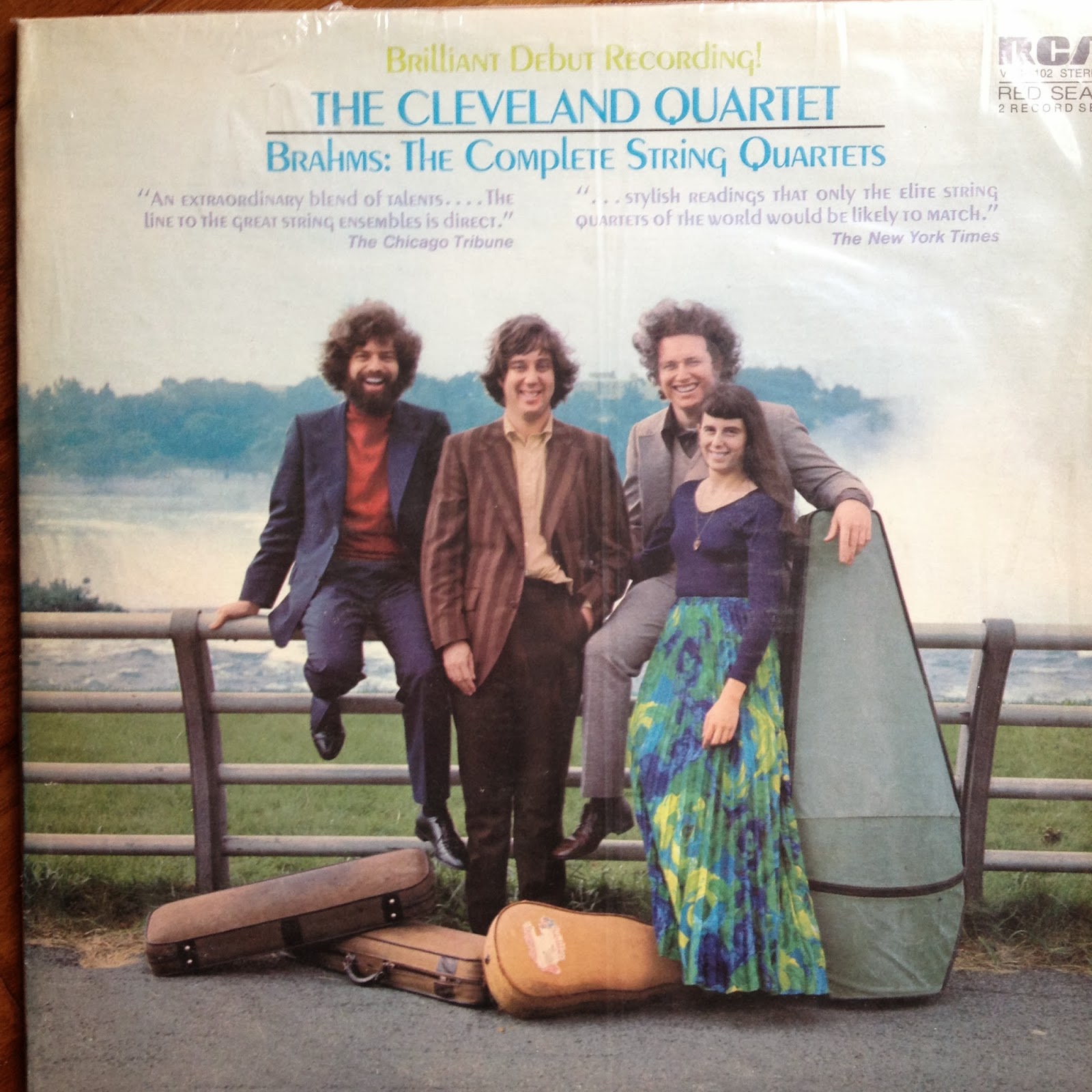 Brahms was a perfectionist.  He pained over scores.  It took him twenty years to write his first symphony, which one of his friends, in a fit of ecstasy, declared to be Beethoven's Tenth! (A review like that is a blessing and a curse...)  He ruthlessly destroyed any work he deemed unworthy.  As a consequence, once he matured as a composer, it is hard to find bad music by Brahms (early work excepted... his first public audience reportedly booed and hissed). Though hugely successful later in life, critics often discounted his music as a throw-back to an earlier time. Is that so bad, if that time contained Mozart, Haydn, and Beethoven? History has proven those critics wrong, wrong, wrong as the avant guarde of his generation passed into obscurity and Brahms' music became common repertoire.

This two-disk set of Brahms' String Quartets performed by the Cleveland Quartet in 1973 sounds sublime on headphones, so I'm plugged in, lying on the sofa.  I am lamenting that I do not have the beanbag chair in which I lounged away much of my teen-aged years listening to rock and roll records.  This recording makes good use of stereophonics, splitting instruments onto different channels. The music is very reminiscent of Beethoven, I think, so if you are a fan of his, you'll like these quartets.  Wonderful moments to savor:  the brooding melancholy, reminiscent of Beethoven's "Cavatina" in Op 51, no 1; the slow movement of Op. 51, no. 2; and the unexpected turns of the third movement of Op. 67.

Brahms enjoyed his beer, so I think a beer cocktail is appropriate: How about a Black Velvet?  Yes, yes, inspired, if I don't say so myself!  Click the link below and gather your bar gear.

Here is a link to a lovely Brahms work: http://www.youtube.com/watch?v=LLcX5vYsfNg

I know I just told you all about the quartets, then gave you a link to Cello Sonata No. 1 in E minor, Op 38. I stumbled across it while searching for one of the quartets and... okay, okay, I admit it, I'm a sucker for a good cello sonata...

Fill half of a big, red-wine glass with Guinness.
(There are lots a great stouts out there, so if you have a favorite, substitute it)
Top the other half of the glass with champagne
Stir ever so gently