7 Reasons why Trump is the Perfect Leader: A Humble, Taoist Approach

“Would you like to save the world from the degradation and destruction it seems destined for? Then step away from shallow mass movements and quietly go to work on your own self-awareness. If you want to awaken all of humanity, then awaken all of yourself. If you want to eliminate the suffering in the world, then eliminate all that is dark and negative in yourself. Truly, the greatest gift you have to give is that of your own self-transformation.”

In a democracy, we get the leaders we deserve. Presidents are like giant mirrors, reflecting who we are back to us. We've been lions like Washington, liberators like Lincoln, and Social engineers like Roosevelt. But what are we with Trump? We're looking at the reflection and some of us love this image... others do not. I'm not going to argue the rightness or wrongness of Trump. However, I will argue that he is the perfect leader for our time. I'm also going to argue that he is what he is, and that is us. If you don't like what you see, then you should consider looking within yourself.

Seven Reasons Why Trump is the Perfect Leader right Now

1. We live in a hyper-connected, hyper-fast age of 24 hour news cycles and social media. Trump is the perfect leader for the post-Andy Warhol world in which everyone gets 15+ minutes of fame. Trump is addicted to it, and so are we. As the late Carrie Fisher said, "Instant gratification is too slow."

2. Celebrities are our spiritual leaders, soothsayers, and philosophers (as evidenced by the quote in 1). We follow Brad and Angelina, we watch Celebrity Apprentice, and make the Kardashians famous because they're famous. It logically follows that we would elect a reality TV star to be president, a man more comfortable in front of a camera than by himself. He's the perfect celebrity leader.

3. We're infatuated with inherited wealth. I cannot get through the check-out aisle of the supermarket without seeing a picture of the British royal family on a magazine cover.  We talk a lot about the "self-made man," but what we really want is royalty. Trump is the perfect aristocrat. He's never had to get a job or do anything except be famous and wealthy. He embodies the life of leisure that we all aspire to: the penthouse suite, super-models, hob-nobbing with celebrities, overseeing grand projects, and flying in private jets.

4. American intellectual thought has been compressed into 140 characters or less. As with other aspects of our lives, we've compartmentalized, homogenized, and commercialized ideas for easy consumption. We like the processed, shallowness of sound-bites. As Jeff Goldblum says in "The Big Chill," we don't want to read anything longer than the average crap. Trump is the perfect leader in these times. He knows how to create a movement in short, disposable ideas (he's already starting throwing some away: remember "lock her up."). In earlier times we had whole sentence ideas: Jeffersonian Democracy, Monroe Doctrines, etc., now, we have McTrumpism. America, Your order's up!

5. We've entered a post-shame society. We have elected the quintessential playboy.  Conservative Christians that supported Trump don't seem to care about personal flaws or morals in politicians anymore. "Nothing's shocking," as the Jane's Addiction song goes, "and the news is just another show."

6. We've embraced Narcissism as our National Ethos. We can finally put away our quaint notions of "hard days work" is rewarded and the content of our character, etc... We now have the perfect leader who shows us that its about the tie you wear, the hotel you sleep in, the model you marry, the jet you fly, and the steak you eat.

We've forgotten that the government is by and for the people. It's these crass, childish politicians that we elect over and over who make us think government is the problem. They're like drunk extensions of our worst selves. Remember the old saying, "drinking only enhances your personality." If you're a happy person, you'll be a happier drunk. If you're a jerk, you'll become a bigger jerk. We need to put away the myth of the savior politician. They're just flawed people like the rest of us with egos in desperate need of validation. We have to pressure all of them, all the time to do the right thing, to act in our interests or they won't.


So What does Trump Being "Perfect" Mean?

We shouldn't be arguing about whether Trump is going to be a good or bad president. He is what he is: the perfect president for our times. As Pogo says, "We've met the enemy and he is us." Mr. Trump perfectly embodies the current state of American popular culture... and we're drunk on it.  If you don't like the current state of affairs. If you don't like what you see in the mirror, perhaps you should look inside yourself to see how you've contributed to this environment. We've all done something (or not done something) to make a nice warm place for Mr. Trump to thrive and ascend to the highest office.


What can You do?

"Do you want to change the world? I don't think it can be done.
The world is perfect and cannot be changed." --Lao-tzu

You cannot change the world, but you can change yourself... Remember, Trump isn't an accident. He is not a clown. He is us, and maybe that is what hurts some of you so much.

My daughter and I thought about how we would change our habits to make a better world, starting with ourselves. We came up with a plan based on behavior that our cat taught us. If you're interested in how we're moving forward, check out our book: Make America Purr Again. 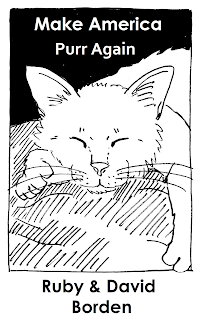 You can also find David at www.ScribbleFire.com and Twitter

NOTE: Before you troll me or send me a screed, consider that this post is non-partisan. I've been both a Republican and a Democrat. I'm now an Independent.