When I first encountered the terms Libtard, Cupcake, Cuck, and Snowflake on Twitter, I had to look them up because I hadn't encountered them in daily life. People don't seem to use them face to face. It's easy to hurl insult-grenades from the safety of distance, without having to look people in the eye. It's the cowardice of the white hood... it is hiding in the shadows because you can not withstand the shame of acting dishonorably in broad daylight.

I will argue that these insults reveal a great deal about their users: people who are suffering from self- loathing, isolation, and fear. I'm not a fan of Political Correctness, so I will NOT ask people to surrender their right to free speech. I believe free people have the right to say even the most horrible things. I merely wish to give you the tools to disarm the power of these words to inflict injury. I leave it to you to make your own decision regarding whether you will use any of these insults, condone their use, or react to them.

Let's look at each in turn:

I'd like to start with Snowflake, a person who believes he or she is unique and special. I was brought up in a Southern, Conservative household. I devoured Ayn Rand at a young age. One of the core tenets of classic conservatism is a belief in the individual. So, I find it strange that in America, the birth place of execptionalism and the myth of the rugged individualist,  we would invent an insult for daring to think you are exeptional, special, or unique. Something else must be at work here. Perhaps unpacking the rest of the insults will help us understand what that is. https://en.wikipedia.org/wiki/Generation_Snowflake 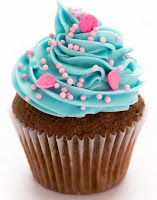 A cupcake is someone who is soft in the center or sweet. It can also be a fan of My Little Pony. My guess is that a person who hurls this insult is, by contrast, "hard" in the center (or not a fan of fans of My Little Pony). I don't know if that is a virtuous trait. I don't aspire to be hard-hearted. In fact, having a hard heart sounds like a terrible way to live. To be human is to remain compassionate in the face of terrible circumstances. I was a caregiver to my daughter for years. She had significant disabilities. I could have let myself become hard. I could have let anger define who I was. Instead, I chose to be a man. I chose the hard path of opening my heart. In my view, this insult collapses. Something else is working here. Let's keep exploring. http://www.urbandictionary.com/define.php?term=Cupcake

My personal favorite is LIBTARD. I put it in all-caps because I find this one especially interesting. The word is a combination of Liberal and Retard. Now, we're getting somewhere! As you can image, having had a child with significant developmental disabilities, this one strikes close to home.

The word traces an interesting etymology that presumably fights back against the so-called "PC-nazis." Let me put myself in the shoes of someone who uses this word. Let's call him John. The word "retard" is frowned upon by society. Recently, I've even seen it referred to as the "R-word" by disability advocates who see the word as abusive and demeaning. It is especially onerous because it singles out a vulnerable population that is frequently abused (as we saw in the horrible kidnapping and torture case recently). John feels frustration that he cannot use this word anymore due to political correctness. John shortens the word to "retard" to make it "slangy and cool" and no longer makes fun of disabled people. However, this logic is faulty. It's like saying "nig" is not related to "nigger" because it's shorter. But here's where it becomes truly interesting. John transforms "retard" into a morpheme (a building block of language, such as suffixes, affixes, etc) and glues it to "Liberal." John feels triumphant. He feels free to use the word because if he gets called out, he can claim the PC Nazis are oppressing his right to use a legitimate slang term. He feels justified in getting indignant when someone thinks he shouldn't use the word that has been hurled at many disabled people as they were getting raped or the shit kicked out of them. John is proud of himself. He feels edgy and rebellious.

For this article, I did a quick search of "libtard" on Twitter and got thousands of posts. I copied one here because I liked the fact that the person also used the word "retard" to make sure he or she was clear about their position on "retards." I found it equally interesting that this person's avatar is a Christian cross. I think this person should spend more time reading their bible and less time Tweeting.

"Retard" is an offensive term to persons with disabilities and their loved ones. But, who am I to curb your freedom of speech. Use it if you feel you must. In fact, why don't you use it more. You should walk up to the next disabled person you meet and call them a retard. Or, you could call grandma, who is starting to feel the effects of Alzheimer's, and call her a retard.

Here is a link to "Crip the Vote," a non-partisan advocacy group on Twitter that is trying to empower persons with disabilities. This page explains why they use "crip" as a way to reclaim the power of an insulting term:  http://cripthevote.blogspot.com/2017/01/notes-on-crip.html?m=1

I couldn't resist adding this one because I thought it was very inventive. This guy has taken the "libtard" to a new level. He has added the F-word prefix and -ia (meaning land) as a suffix to create a place for libtards to live. Interestingly he dropped "lib," so, technically this is just a place for "retards" to live. If my daughter weren't dead, I suppose he'd want her to live here happily. I'm sure he's a kind family man, this one. 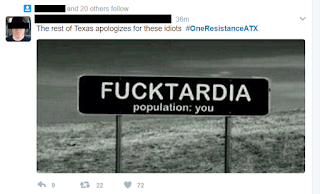 
Translations of the Four Insults

After seeing how the four insults are used on Twitter, it seems that their users regard these words as cute and clever, "intended to infuriate Libtards." They also see themselves as warriors on the front lines of a conflict to preserve a particular way of life. So let's translate these warrior tools into English. What is the user really revealing about themselves:

When you see Snowflake, read: "I have not lived up to my own expectations. I'm afraid that I am not special."

When you see Cupcake, read: "I wish I could live a life of compassion and love, but am pigeon-holed by the culture into a role that makes me unhappy. I wish I could openly love My Little Pony."

When you see Cuck, read: "I am sexually inadequate."

When you see Libtard, read: "I fear that I will be seen as intellectually inferior by others." 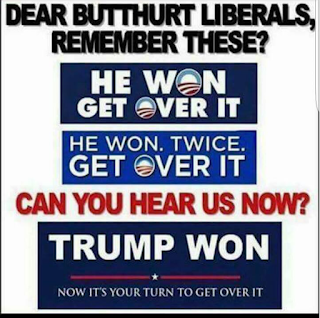 "Butthurt" moved from Twitter to Facebook for me, so when the above usage appeared in my FB feed, I thought I should add it to my catalog. I don't have a problem with the political statement made in the image. I just wonder about the use of very nasty language. I looked up "butthurt" on Urban Dictionary. They say it's directed at one who has an overly emotion response, characterized by shame towards a perceived aggressor.

Weird place to go, don't you think? Not too civil, if you ask me... not a way to have a productive conversation.

When one of these insults is thrown at you, translate or rephrase them as I've done above. Instead of feeling anger-- feel pity for these people who have to resort to insults and personal attacks because their arguments lack supporting details. Just remember, these attacks say more about the attackers and their personal demons than they say about you.

For information about bullying, see https://www.stopbullying.gov/what-is-bullying/